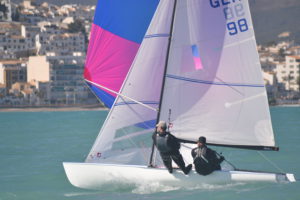 Euroflying 2015 was held from March 19th to March 21th along with the Spanish Flying Dutchman Cup in Altea Waters, The CN Altea was in charge of organising a excellent event, as it always does.
Eleven FD from three countries attended the competition. Unfortunately weather did not accompany two first days (19th and 20th) and races had to be suspendend due to strong wind and persistent rain. Disapponintment of not sailing was compensated with a wonderful dinner offerend on the evening of the 19th offered by the CN Altea.
On the 21st, taking the advantage of a sunny day with wind ranging from 7 to 12 knots, four races were held.
Races were generally with very contested starts and ​legs​ until first ​buoy​, where leading​ ​boat​s​ would start to take a significant advantage. Races were dominated by GER 98, followed by ESP-69 and ESP-80.
Euroflying 2015 was finally won by GER 98 with Shmuel Markhoff y Michael Matscheroth as crew, while ESP-69 with Pablo Geras and José Luis Ruiz was the winner of the Flying Dutchman Spanish Cup.RESULTADOS_Euroflying 2015
Enrique Egea Moreno

Season is starting in Europe and there a plenty of occasions to get back to routine, to improve or just enjoy FD sailing with a large number of FD trainings organized by various European FD classes. Starting in Bavaria, Southern Germany at the Tegernsee on 11./12.04. The next occasion is the Neusiedler See in Eastern Austrian the weekend just before the Austrian Championship The Herrschinger Segelclub at the Ammersee in Bavaria will organize a training, too. Dates are not confirmed, yet. Same with the Berlin section of the German Class who are planning a training in Warnemünde. The Dutch class is also organizing three training weekends at Braassemermeer on 9./10. May, 16./17. May and finally 18./19. July. And the Italian class is planning a training before the Trofeo Marina in Torbole, Lake Garda. Event and date is not confirmed, yet.

Plenty of occasions and no excuses!

Just two more weeks and the long winter break northern from the Alpes is finished, too. First regatta of the season is the FD Cup in Duisburg at the last weekend of March. Here is the direct entry link. MARC GER172

The latest entry list for the Eurocup in Altea which is also the Spanish Championship is now online. It´s still a bit short, so if you want to start the European FD season in sunning and warm Spain, here´s your chance! MARC GER172