Having listened to all the arguments both for & against the adoption of a larger spinnaker and taking into account the views expressed at a number of Competitor Forums over the last 4 or so years, together with the votes received from a good number of the National Secretaries it was obvious that the majority of the members were overwhelmingly against the proposal. Your General Committee has therefore decided that it is in the best interests of the Class not to change our rules to allow for a larger spinnaker. We also agreed that the subject is now closed and will not be reopened for discussion or reconsideration for at least 5 years.
I would just like to thank everyone for their contribution to the debate and a special thanks to Konig Sails for making some prototype sails for testing and to those sailors that spent time testing them on the water.
Tony Lyall

The race management feared that there wouldn’t be enough wind on Saturday, the last day of this series and therefore canceled Thursday as a layday: With medium to light wind, again great weather and less waves, the 70 competitors had four more great races with perfect conditions on Thursday and Friday. Race 6 was again won by Szabolcs Majthenyi and Andras Domokos, race 7 by Andras Süli and David Papp. Friday’s race 8 by Australian/Dutch team Ed Cox and Peter van Koppen and the final race 9 by GER 219 Jörg and Nils Hermann. With just 16 points out of 9 races Szabolcs Majthenyi and Andras Domokos can ad again a title as European Champion to their long list of international titels! Congratulations! NED 26 Enno Kramer and Ard Geelkerken finished on second place and the Vespasiani brothers and Nicola and Francesco finished on third. The overall results and an nice pictures gallery can be found here. Thanks again to Robin Matulja and his family who made this great event possible. MARC GER172

This morning almost everybody thought this would be an other day of waiting due to little wind especially when heavy rain killed the last bit of wind. But at 11:00 the wind started again and provided two great races with sun, 12 to 15 knt. and waves up to 15 feet. Kilian König and Johannes Brack took race 4 with an impressiv lead with Christoph Aichholzer and Philipp Zingerle finishing on second. Due to the heavy conditions only two thirds of the fleet finished race five. HUN 70 won their third race in this series. Here are the results after 5 races:overall_5 MARC GER 172 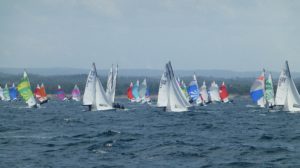 What a great day of FD sailing! After waiting the entire first day for less wind than 11 to 15 m/s everybody was deseperate to go onto the water today. And the conditions couldn´t have been better: Sunny, warm and nice wind and waves for 3 races and 8 hours on the water. The first race was won by the Vespasiani brothers follow by three more Italian boats. Races two and three not completely suprisingly by HUN 70 after 8 (!!) starts for the thrid race when a large number of top teams were banned from the race with BFD. Here are the final results overall_3 after 3 races with 6 more scheduled. MARC GER172 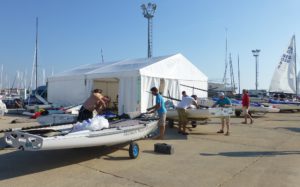 An excellent fleet of more than 70 FDs from 14 Nations went through measurement within the last two days here in Umag. Very little wind on Sunday for training makes us looking forward for the first races on Monday with predicted windspeeds of 20-34 knots. MARC GER172