The 2018 season has almost come to an end for FD sailors in the northern hemisphere. Time to have a quick look back to the plenty of national championships along with of national regattas in the second half of the season. Hans-Peter Schwarz and Roland Kirst won the EuroCup regatta in Torbole and therefore the Thermik Cup 2018 (as every year before). It was a great regatta with new and very well executed organization on water and ashore, plenty of heat and wind. 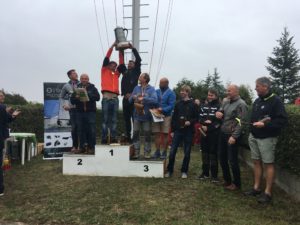 At the same time CZE21, the outstanding team of the second half of these season travelled north after winning the Austrian Championship at the Achensee to become Polish Champion. Some weeks later Jiri Hruby and Roman Houdek became second at the Hungarian Championship at Lake Balaton, which was won – no big surprise – by HUN70. Congratulations!

Jiri´s and Roman´s third championship was the Czech Championship end of September at Lake Nechranize with heavy wind on the water and outstanding hospitality ashore. Read more in the next FD bulletin.

Hopefully we will be able to report about all championships in detail in the next FD bulletin, which will be out in December. (I am looking forward to receiving plenty of material from all national classes!)

Our 2019 race calendar with all International and National Championships, EuroCup regattas is almost completed: Start planning the 2019 season now!