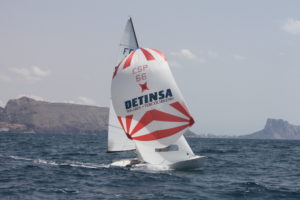 On the past June 30th and July 1st we have celebrated at the ¨Club Nautico de Altea¨ on Alicante, Valencia the 3rdGS Yuasa Boat Race. This year 7 boats have participated, all of them from Spanish teams and with 5 young men among their members   4 crew  1 helmsman.
The fist day of the race developed with middle winds making the sailing very difficult. Only three boats completed the three races, they were the ESP-1, the ESP-66 and the ESP-69.  This last one won the three races that day. At night time GS Yuasa invited to the sailors and their families to a wonderful dinner celebration at the Club Naútico de Altea Restaurant. This dinner hoested 25 guests. On the second race day the wind turned more moderated and constant, very adequate for training. This allowed that up to 6 ships finished the race. The ESP-80 was able to win one of the races and the ESP-69 won the other two races. 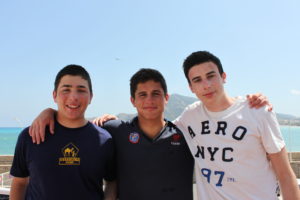 Final classification gave victory to Jose and Pepe (ESP-69) followed by Marco and Gonzalo (ESP-80). The third place was for the couple father-son named the Enriques, followed by their eternal rival ESP-1 that finished on fourth place. All of them followed by the ESP-91, the ESP-11 and the ESP-71. The third annual edition was completed of the race GS Yuasa on a successive way, with the progressive incorporation of young team members that will be the engine of FD in Spain. At last we give thanks to GS Yuasa company for their support and cooperation organizing this successful event and to Alvaro´s team from C.N. Altea, that have made possible this race.
clasificaciongeneraliiitrofeoyuasa