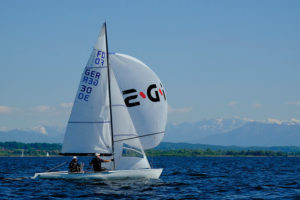 The sailing became quite challenging on the first day when with north-easterly winds blowing mainly along the left side of the circuit where ex world champion Enno Kramer (NED 26) with his Austrian foredeck hand Christoph Zingerle were dominant. The team won through in both races, and towards the end … even against GER 202 (Jörn Borowski, Andreas Berlin), who were in the lead in both races after passing the first pyramid marker buoy but at the finish had to twice content themselves with second place. Almost already lying in wait behind these were Thomas Schiffer and Alexander Antrecht (GER 30) at 5th and 4th place respectively. Missing however from these leaders were at this time the local heroes Hans-Peter Schwarz and Roland Kirst (GER 87) – which a preliminary listing at 8th and 19th place did not yet permit overall placement at the front of the field. However, this was about to change. At the start of the second day, Lake Ammer presented its usual, calm appearance. The nightly, southerly breeze had already died down by the time the sailors appeared on the shore during the morning for their start preparations, although not only the forecasting from the surrounding weather stations was optimistic but also local experts were certain that the situation would improve. At about 13:00 the wind situation had indeed changed and levelled off – somewhat more of an easterly than during the previous day and this was to be of significance. During the first race of the day Schiffer/Antrecht (GER 30) won through against Borowski/Berlin (GER 202), who could thus secure their third 2nd place in a row and were meanwhile leading in the drama. But there then followed the hour of glory for GER 87 (Schwarz/Kirst) who, with their three 1st place results in the following races not only clearly showed all participants that at this point an advantage could be gained by veering to the right, but that those who gained enough of a lead in the first leg up to the pyramid marker and confidently defended it, it would bring their boats successfully across the finish line. Of those leading up to this point, only GER 30 was successfully able to resist and thus secure a decisive lead with a 7th place (scratched) and two further 2nd places that produced the defining point in the overall placings in front of the local heroes. At the close of the day Borowski/Berlin were equally placed, tied on points with Schwarz/Kirst in 3rd place; Kramer/Zingerle were only partially able to build on the results of the previous day and were in 4th place with 9 points difference. Four races in one day – the FDs at Lake Ammer had never seen, or at least had not experienced this for a long time. Accordingly, the participants came ashore quite exhausted in the evening, and were received in exceedingly good style by the DSC team – one should almost say “in the customary style of the club” – with open sandwiches and free beer. This all took place, it should be said, before the actual regatta dinner that was to follow. Therefore, a special thanks should be expressed to the DSC team at this point which, with extraordinary personal effort has succeeded for decades in providing a very enjoyable atmosphere for all participants in all aspects of the FD Cup! There is only one thing left to mention: One merely has a sense of well-being at Lake Ammer, especially if the races take place in the above-mentioned exceptionally good weather conditions. Perhaps one or two other FD-teams can be motivated to take on the journey to the FD Cup – it is well worth it in every respect! In this context, one more small point about the discussion regarding the entry fees beforehand: It is certainly a ligitimate point, and sometimes also useful, to mention annoying aspects and add them to the general discussion. It nevertheless appears to us when considering all that which is offered to the sailors at Lake Ammer in such a three-day event, with the corresponding effort involved on the water and ashore, that the fees there were not really all that much. With regard to the various amenities and comforts as well as the feel-good factor and also in relation to the total effort of the outward journey, one can in our view still speak of fair entry fees for the FD Cup at Lake Ammer. However, evryone of us must (or may) naturally decide this for him or herself. We shall certainly be returning again.