Home / All posts in NED

All posts in NED 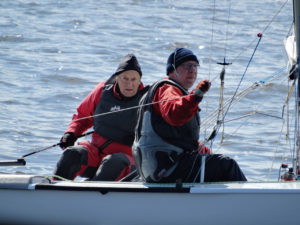 NED
Saturday night, August 8, shortly before midnight our Honorary member and especially sailing friend Thijs Rutten passed away. Thijs was in hospital for a short time and fell asleep peacefully after a short illness. Our thoughts go out to his family.

Thijs, who has been a FD member since 1987, mainly sailed both national and international regattas with his brother Theo. Whether it was a regatta around the corner or on the other side of the world: they were there. Thijs was always there for everyone and has been the race secretary of our Dutch class for years. He enjoyed both racing on the water and the fun on the shore. Especially in heavier weather Thijs and Theo were in their element.

Raised in a large family, the brothers noticed a Hornet sailing on the water. Deeply impressed, the plan arose to sail one as well. They learned to sail in the Hornet by trial and error. They have sailed many races in the Hornet. After these experiences, the switch to the FD was a piece of cake. In the (at that moment) Olympic class Thijs and Theo were a striking appearance. Because their hearts were in the right place and their no-nonsense approach, they quickly became loved by everyone, also in the international field. Until shortly before his death, Thijs could enjoy all the stories and good memories. And if he could, he was happy to visit the regattas to lend a helping hand if necessary.

What a beautiful person we have lost! Character! …. especially in the Dutch FD…. And what a lot he has done for us.

Congratulations to Dutch/Austrian crew Enno Kramer and Christoph Zingerle winning the Dutch Nationals in Horn! Here are the overall results.

At the same weekend the Italian Class was racing their Nationals in Porto San Giorgio. Congratulations to Nicola and Francesco Vespasiani the new Italian National FD Champions. Here are nice photos  from the regatta and the overall results. MARC Ger172

Ronald Stalman just forwarded this news: Due to budget reasons the North Sea regatta is skipped for 2015. MARC GER172

dutch nationals will be extraordinary 0 (0)

After their annual meeting the Dutch board invites all of you to sail the Open Dutch Championship on Sneekermeer to join the 60th anniversary party of the NFDO …….. Spread the word and the flyer and help us promote the FD in the best possible way in the Netherlands.   OKK 2014 promo printversie