Home / All posts in ESP

All posts in ESP

Hi, my name is Javier Martínez Egea, and I am looking for a skipper to participate with me in this years Flying Dutchman World Championship in Altea in the month of September.
I am federated in the Nautical Club of Altea so I have sailed there for the past 4 years and I have good experience. I am a light crew, with a height of 1,80 cm and weight of 70kg, which is good for Altea’s wind conditions. Unluckily I don’t own a boat either, but anyone interested in competing with me please contact me to this number: 617608755

As we cannot sail the Worlds this year our spanish friends organized a great alternative. The SPANISH CUP will be sailed from 11th to 13th of September in Altea.

Details will be published as soon as we know more. 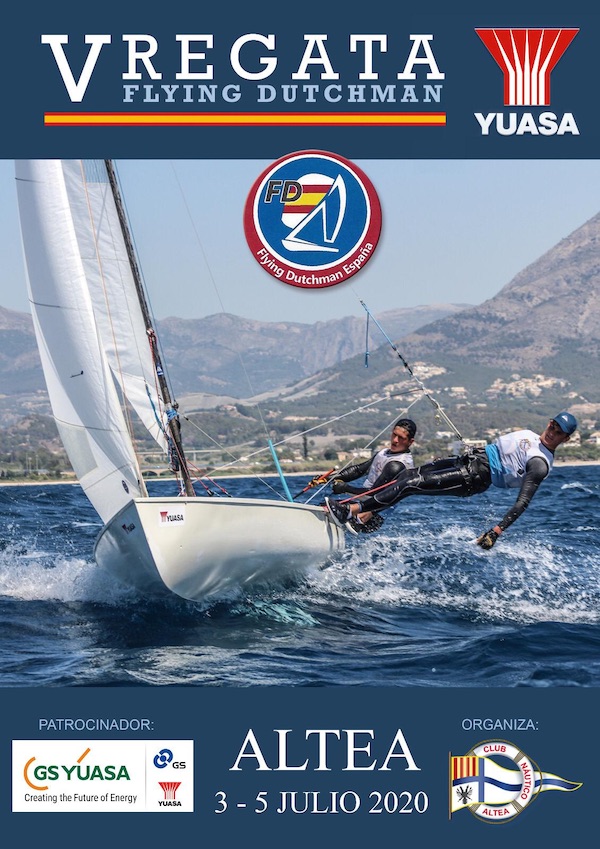 On February 14, 15 and 16, 2020 we were lucky enough to be able to compete again for the second consecutive year at the Olimpyc Week of the Valencian community in Torrevieja.

This year there have been a total of 15 ships, of three nationalities (English, German and Spanish).

The first day was somewhat frustrating and very complicated. With a wind that made it impossible to get out of the trapeze AT 3 TIMES of the regatta 3 sleeves were completed. The main protagonists of the day were undoubtedly Fran and Pepe (ESP-99) who, with their new racing car Er Taco, scored two first and one second. The GER-88 with two seconds and a third was the only one more regular. The rest of the fleet somewhat irregular.

On the second day the wind rises a little to the point of being able to go out to the trapeze and now. Once again Fran and Pepe (ESP-99) stay up with a first, a third and a second. The GER-88 follows him from afar and Gines and Alvarito (ESP-6) finally mark a first. In the rest nothing remarkable except the British who is first in the fifth sleeve.

The last day rises with a rather disgusting fog and mini bottles of cava courtesy of Tom and Meike (GER-112). Some German ships do not compete and after leaving the field the sun begins to appear with wind conditions of about 10 knots. After two seconds and ensure winning the race Fran and Pepe go to port victorious without contesting the last race. Ginés and Álvaro are first two in the last two races, climbing to the third final position and the GER-88 wins the eighth round to secure second place.

Great premiere of Fran and Pepe and fun weekend with very good vibes with the Germans. The FD Class appreciates the excellent organization of the Torrevieja Yacht Club with very good meals at the end of the races.