Home / All posts in World Championship

All posts in World Championship

World Championship
At the Worlds in Spain just a few weeks ago the IFDCO was not able to give the Tullio Pizzorno Trophy to the winners Guzman Egea Aguado and his crew Jerry Vinkensteyn.
Of course we felt very sorry for this. We tried to find out where the trophy is right now but nobody present had a clew.
Doing more research in order to locate the trophy we found out that the trophy was presented to Finn Bismark and his father at the Worlds in New Zealand in 2019. As they foresaw that returning the trophy to Europe for the next Worlds could be difficult they just made a series of photos and put the trophy back into the container. In which container they put the trophy so for Germany, Hungary or the Netherlands they cannot remember of course.
So we kindly ask if anybody has any information on where the trophy is right now? Could you please let us know so we can still present the trophy to the winners?
This is how the trophy looks like: https://www.sailifdco.com/documentation/trophies/tullio-pizzorno-trophy/
Kind regards
Peter van Koppen

September 4, the registration and measurement of boats began for the World Championship of the Flying Dutchman dinghy sailing class, thus making the necessary checks of the participating boats to ensure equal conditions and allow a competition on time.

The first day of the championship took place on September 6, which started with Southeast winds with 7/8 knots of intensity, thus allowing the scheduled races to be held with routes in the Olympic triangle format.

The Hungarian crew, made up of Szabolcs Majthenyi and Andras Domokos, were already in advancing positions, finally placing themselves as leaders in the provisional classification with two first places in the two races scheduled for this first day. Francisco Martinez Torregrosa and Jose Luis Ruiz Giron, from RCN Torrevieja, took second place; preceded by the German boat manned by Kay-Uwe Lüdtke and Kai Schäfers.

During the morning of Tuesday, September 7, 34 boats left the Altea Nautical Club to celebrate what would be the second day of the Flying Dutchman class world championship. Unlike the first day, the wind conditions only allowed the completion of one race of the two that were scheduled. At 2.30 pm, the Flying Dutchmans began to return to port with a postponement of H, as the wind forecast indicated that it would not improve until after 4 pm. Finally it was decided to postpone the day on A until the following day, due to the lack of wind.

The third day of the Flying Dutchman World Championship was marked by a south wind of 8/9 knots, thus allowing the two more races to be carried out. Each race was carried out in a duration of 1 hour and 30 minutes, both with a very tight start and a highly competitive fleet. In the first race, the fourth of the championship, the Hungarian boat, with sail number HUN 70, maintained its first position, preceded by the German team formed by Peggy Bahr and Torsten Bahr, with sail number GER 19, who crossed the finish line in second position. The third position went to Spain, with the RCN Torrevieja boat manned by Francisco Martinez Torregrosa and Jose Luis Ruiz Giron. The German team, this time led by Kay-Uwe Lüdtke and Kai Schäfers with sail number 88, climbed up positions during the second race of the day, finishing in first position. Hungary moved to second place in the last race of the day, but they continued to be the leader of the podium. The Spanish team of RCN Torrevieja secures third place in the provisional classification.

With two days remaining to be held, the podium was already consolidating with six first places and one second for the Hungarian team, made up of Szabolcs Majthenyi and Andras Domokos.

Germany and Spain continued to defend their presence on the podium during the rest of the week, with three third places for the RCN Torrevieja boat manned by Francisco Martinez Torregrosa and Jose Luis Ruiz Giron and four second places and one first for the Germans, Kay-Uwe Lüdtke and Kai Schäfers.

Finally, the Spanish crew of RCN Torrevieja took third place in this world championship, thus demonstrating the high level that the national fleet of FD has acquired in recent years.

The International Flying Dutchman Class Organization thanks the CN Altea for the great realization of the World Championship 2021. It was a pleasure to be in Altea and sail under a highly professional organizational team. Thanks! 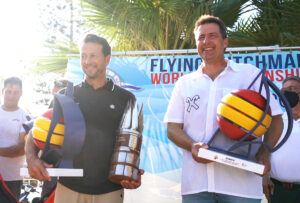 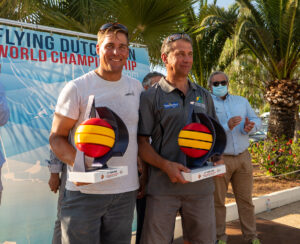 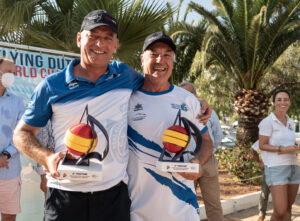 Dear Participants of the Worlds, we are inviting you to our Competitors Hearing tomorrow (Tuesday) at 6 p.m. at the measurement tent. Best regards, Meike & Peter

please fill out the following form before arriving in Spain for the Worlds.

World Championship
To all FD sailors:
STANDPOINT
In regard to the upcoming Worlds and the permanent changing situation around Covid the IFDCO has the following standpoint:
As up to this moment the Championship will take place. If the situation in Spain changes in the way that the Championship is no longer possible we will inform you on the IFDCO-website as soon as possible.
Today’s situation (21-7-2021) is that  Spain is coloured red but allows people to travel into the country. To do so several requiremenents do exist; so
+  You need to show proof of full vaccination at least received 14 days before you tavel to Spain
+  You have proof on paper that you have a full recovery from Covid-19; this statement must be at least 11 days old but not older than 180 days
+  You must have a negative PCR test not older than 72 hours
+  You have a negative antigene-test not older than 48 hours
+  In these cases you don’t have to go into quarantine
+  ChiIdren under the age of 12 can travel freely into Spain without any of the above mentioned documents
At the moment different countries have different status for Covid-19. For example Germany and Italy are green and the Netherlands are red.
So please check out the situation in your own country and of course also the status for your return.
We understand that some of you have difficulties with the decision weather they should go to the Worlds or not. There is a lot involved also financially.
As IFDCO we of course hope that we will all be sailing in Altea and have a great time! But of course we do not have control over this situation. If very shortly before the event travelling to Spain is not longer allowed this would be
awful.
So everybody has to take their decision for themselves and take their own responsibility in this.
We hope that we can all be there and have a great Championship!!
Regards
Peter van Koppen
President IFDCO
Older Entries
Categories
Archives